To me, true beauty is not just a “look”. Rather, it is the achievement of a confidence projected through the unification of Mind, Beauty, and Soul. At Michael’s we believe a healthy spirit and mind are an essential part of true beauty.

The confidence gained by rejuvenating your hair, skin, face, hands, feet and body is an important way of releasing everyday stress. At Michael’s our services, products, and skilled professional staff are constantly striving to help you achieve this perfect balance.

“These awards are a stamp of excellence, and all our award winners are part of an exclusive and illustrious group comprising of some of the most influential names in the luxury markets. It is therefore my honour to be able to wish them congratulations on this success- here’s to a great future.” – Sophie Milner, Awards Coordinator

The Walleye chose Michael’s Hair Design & Day Spa as the #1 Hair Salon & Barbershop of the year in Thunder Bay.

The Walleye chose Michael’s Hair Design & Day Spa as the #2 Day spa of the year in Thunder Bay.

A Contessa award is the highest accolade a beauty professional can achieve in Canada. Michael’s is proud to be the only Thunder Bay Salon to be nominated for the Salon of the Year Contessa award. The salon was a finalist for this award.

The people have spoken! Michael’s Hair Design & Day Spa has been chosen as one of Canada’s Best Value Spa through Westjet’s Up! Value Awards.

Canadian Spa of the Year 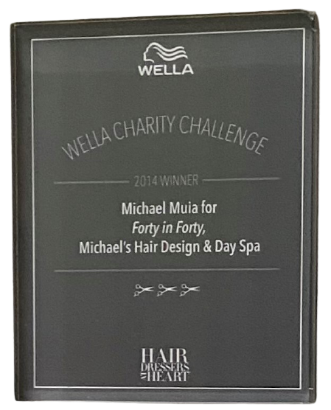 In 2014, after oral cancer surgery, and while on chemo and radiation treatments, Michael started the 40 in 40 fundraiser, to raise money and awareness for head and neck cancer.

His efforts were supported by family, friends, & over 60 hair salons. They helped sell tickets, as well as gathered donations from many local businesses.

17 of those salons graciously participated in a Finale Hair Show Event, which was held at the CLE on April 25th, 2014, and was attended by over 2000 people. There were various entertainers, and our colleague & friend from Wella (@wellacanadawest), Stephen Lomas, flew all the way from Vancouver to volunteer as the MC.

Each salon represented an Era and showcased hairstyles and fashions from each Era. Michael and his team closed the show with futuristic styles. It was fitting for Michael to represent the future, given that his goal was to provide hope for those who were going through, or will go through this type of cancer in the future.

Michael aimed to raise $40,000 in the 40 days leading up to and including the final event. This goal was surpassed & more than doubled! Almost $90,000 was raised and donated to our local Cancer Centre, and was enough to open a Head and Neck Cancer Treatment Room in the Cancer Centre. Donations continued, even past the event, and now total over $100,000.

Michael was grateful & overwhelmed, but not surprised, by how our community of hairdressers and other businesses came together to support a local effort.

Donations are still accepted at https://www.healthsciencesfoundation.ca/40in40. Your contribution will continue the work of 7 years ago, giving hope and improving cancer care for your loved ones, here in Thunder Bay and across Northwestern Ontario.